Yellowtail snappers are the most popular fish to catch on the reef in Florida. This is because they are typically easy to catch and are great to eat. The method to catch them is actually quite unique and is called flat-lining. This is done cause the yellowtail snapper are suspended in the water column rather than being right on the bottom. Most other snappers and groupers are targeted with bottom fishing techniques. 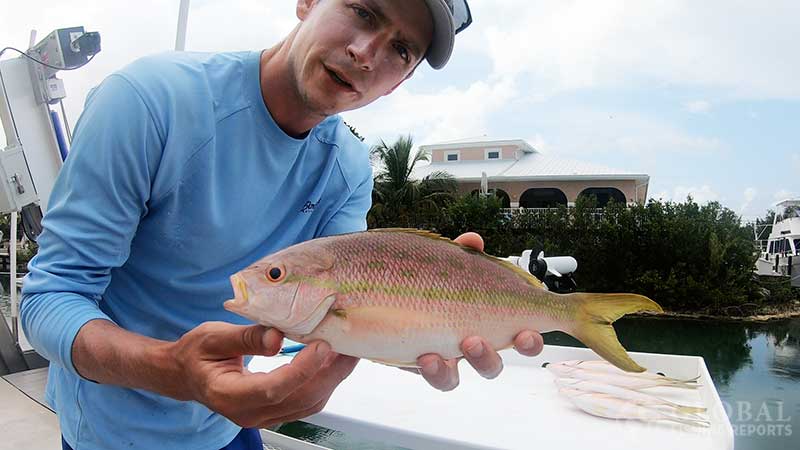 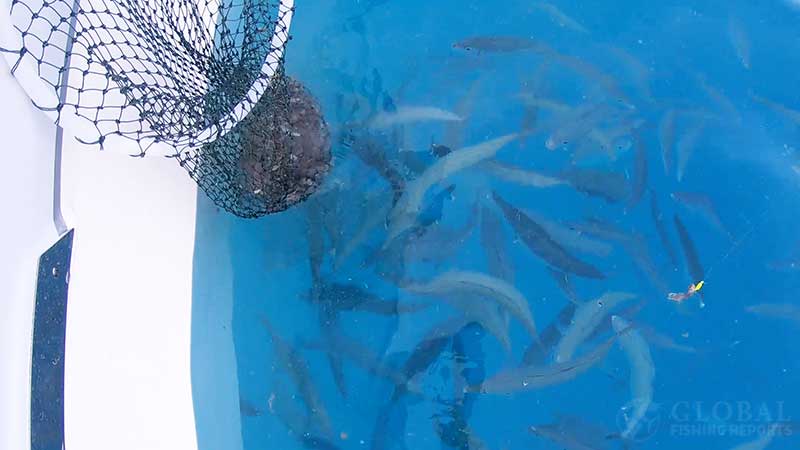 The first step to catching yellowtail snapper is to put out chum. In the picture above I am fishing a reef in the Florida keys. The chum line is full of large cigar minnow and rainbow runners right by the boat. Yellowtail snappers typically hang anywhere from 10-80 feet behind the boat.

Personally, I like to use single-ground menhaden chum. This is ground bunker with large chum pieces including the heart of the bunker which can be used as bait. Yellowtail snapper will also come to oats which are commonly used in addition to regular chum. Oats are not needed but can help the yellowtail snapper stick around if there are lots of other boats in the area. Using two blocks of chum at once is another way to attract more yellowtail snapper.

In the video above I show how to catch yellowtail snapper. We were fishing a shipwreck that is also on the edge of the reef in about 100 feet of water. While fishing we also catch cigar minnows, rainbow runners, and spade fish. When fishing the reef it is also good to put out a top line with thin wire on it to try and catch wahoo, king mackerel, cero mackerel, and barracuda. 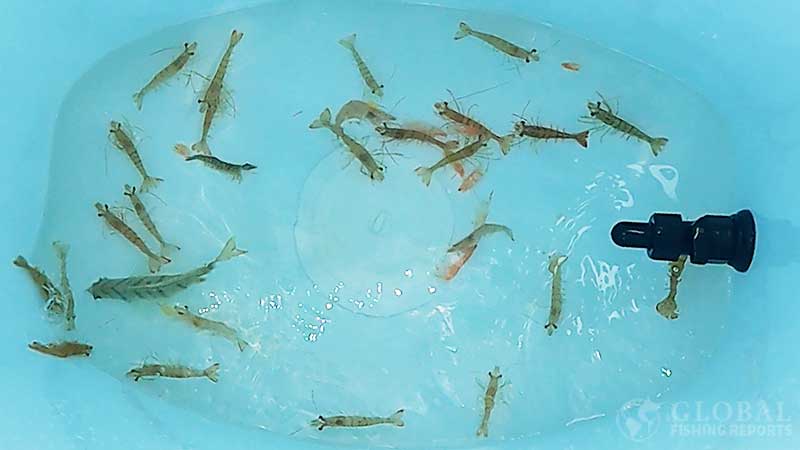 Live Shrimp is one of the best bait for yellowtail snapper. It is also the most expensive bait and at times can be difficult to get. The shrimp can be hooked through the head or tail. Do not hook the shrimp in the center or back as the bait will spin in the current and it is unlikely any fish will bite. Shrimp needs to be alive or very fresh. Dead stinky shrimp that are pink will not work to catch yellowtail snapper.

The picture above is the livewell of our boat which has about two dozen shrimp. It is common to bring 10 or more dozed shrimp when fishing the reef all day. It is also good to have ballyhoo or squid as a backup bait in case you run out of shrimp. These are great baits to flat line or fish near the bottom. There are very few fish that will not eat a live shrimp as long as there is a thin fluorocarbon leader and a small hook. 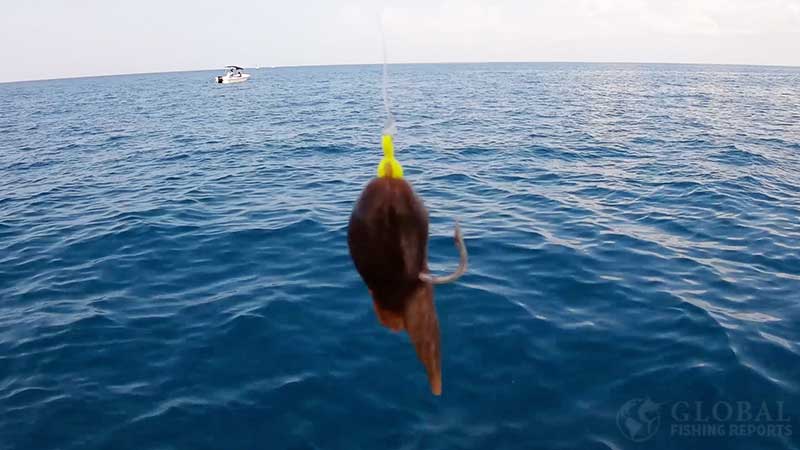 Fish hearts are my favorite bait to use for yellowtail snapper fishing. They are my favorite but I do not like having to dig through the chum to find them. If you are using single-ground menhaden chum you should be able to find the heart of the menhaden fish. There are around 20 hearts in each 7-pound block of chum. After catching a fish with the heart it can typically be reused. I have caught 10 plus yellowtail snapper on a single fish heart. This helps to save bait and is a fun challenge to see how many snappers can be caught on one piece of bait.

My favorite chum is tournament master chum 5/8 inch grind size made with 100 percent north Atlantic menhaden. This will have hearts in it and double ground typically does not. If the chum bag has small holes most of the hearts should be left at the end. Otherwise, the chum block can be checked from time to time to find the hearts on the outside of the block. 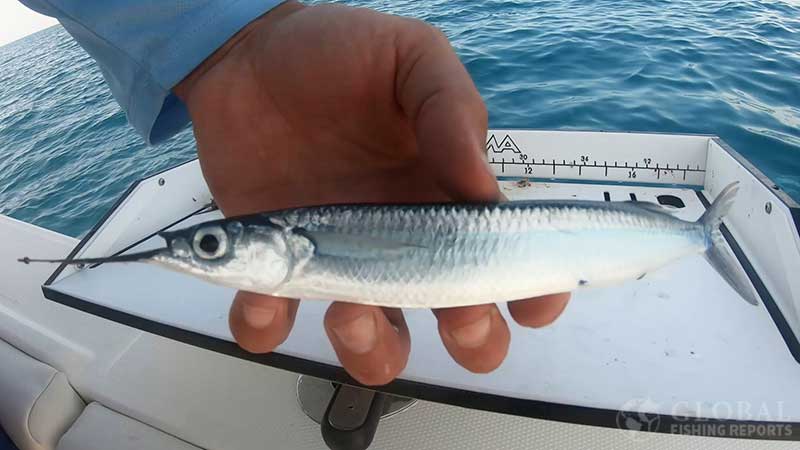 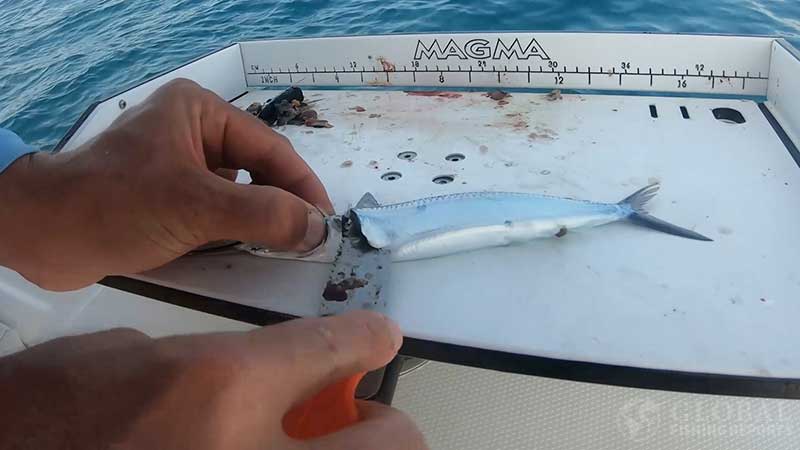 In the photo above I am filleting a ballyhoo. This is done just like any other fish. Once each side is cut off then pieces should be cut of the fillet. Large ballyhoo can be cut vertically while smaller ballyhoo many need to be cut horizontally to have long enough pieces of bait. 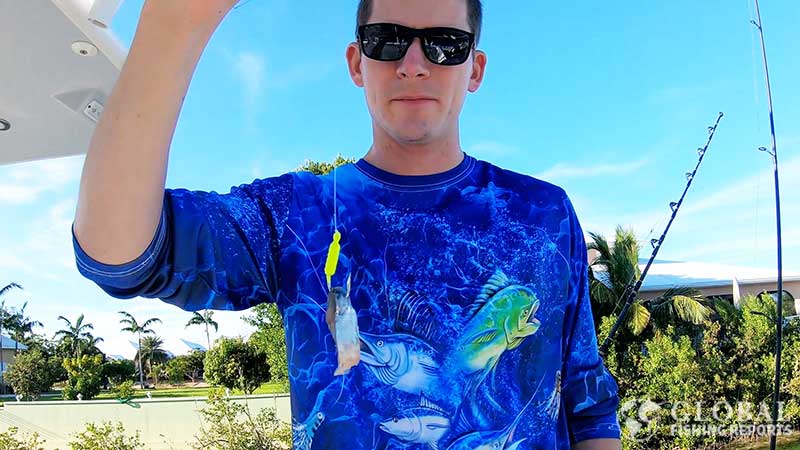 I placed a small piece of ballyhoo on a 1/64-ounce jig which is shown in the photo above. This is a great bait setup for flat-lining to yellowtail snapper. The piece of bait could also be put on a hook. Notice that the bait is hooked toward the top of the bait rather than the middle. This will allow the bait to flutter and not spin in the water. 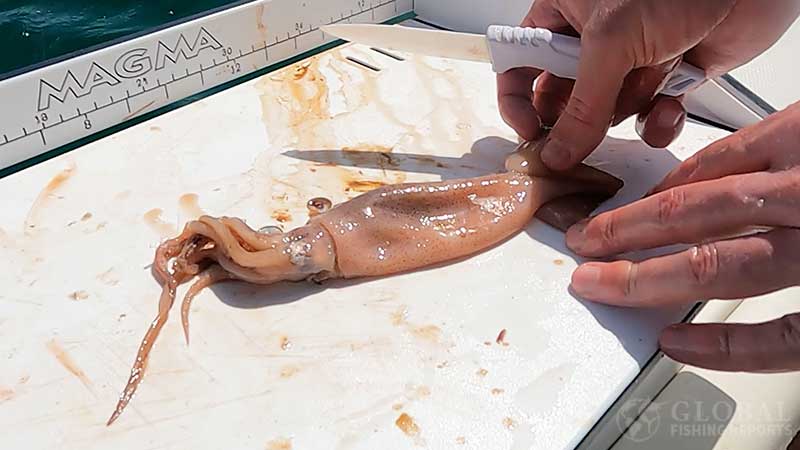 Squid is an easy bait to use for yellowtail snapper. A 1-pound box will have 6-12 squid depending on the size of the squid. For mahi-mahi pitch baits a whole squid can be used. However, for snapper only a strip of squid is needed. 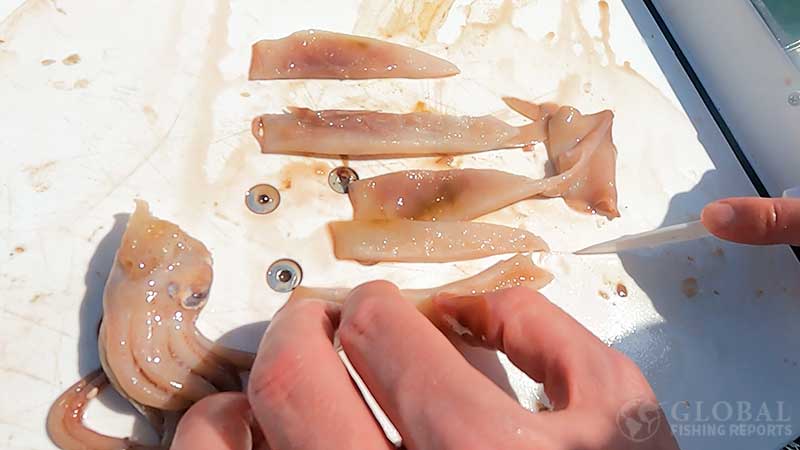 The squid should be sliced open and the ink sack should be removed. If the squid is still partially frozen it is easy to remove the ink sack. It looks like a minnow in the center of the squid. Once it is removed the flesh of the squid can be sliced into strips. About a 1-inch thin strip is perfect for yellowtail snapper. Just place it on a small hook or small jig just like the strips of ballyhoo.

In the video above I show how to cut up squid for bait. We actually caught a 38-inch cobia on a small piece of squid. Using squid for bait we also caught lane snapper, yellowtail snapper, grunts, grouper, catfish, and a pufferfish. 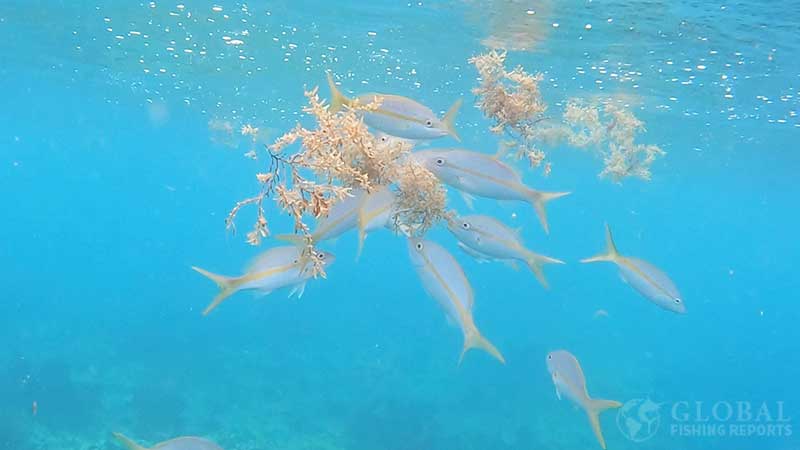 When snorkeling I took this picture of about 10 yellowtail snapper biting into sargassum weed. There are seeds in the weed but this is not what the fish are trying to eat. Sargassum is often full of small crabs, shrimp, and small fish trying to hide in the weed. It is actually surprising how much life is found in sargassum weed. The fish bite into the weed hoping to catch fish and bait that have camouflaged themselves in the weeds. Fish species like the sargassum fish actually look just like a piece of the weeds. I have found these fish in the stomach of mahi-mahi.

How to Clean a Yellowtail Snapper

In the video above I show how to clean yellowtail snapper. The fish are easy to clean using a basic fillet knife. If you have lots of snapper and grunts to clean an electric filet knife can speed up the process. The snapper can also be scaled and then gutted to be cooked whole. This allows for the most amount of meat to be harvested. The fillet is nice white meat with a neutral not fishy taste. 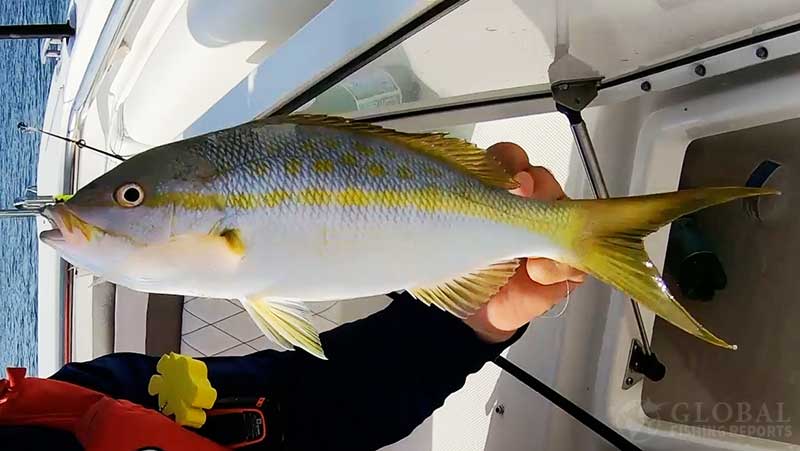 In Florida yellowtail snapper is open 365 days a year. Each angler is allowed to keep 10 snappers per day. However, this limit is for 10 total snappers. That is 10 total not ten of each type. Snappers that are included in the 10 per day limit are mangrove, mutton, cubera, schoolmaster, vermilion, black, wenchman, queen, blackfin, silk, dog, and mahogany.

Some of these snappers such as the mangrove, mutton, and vermilion are only allowed 5 per day depending if they are caught in federal or state waters. Red snapper has a bag limit of one per person in federal waters and 2 per person in state water. It is important to not reach a limit and then fish in waters with a lower fish limit as you can get a ticket for that. Read the regulations on the Florida Fish and Wildlife website for more information.

How to Measure a Yellowtail Snapper 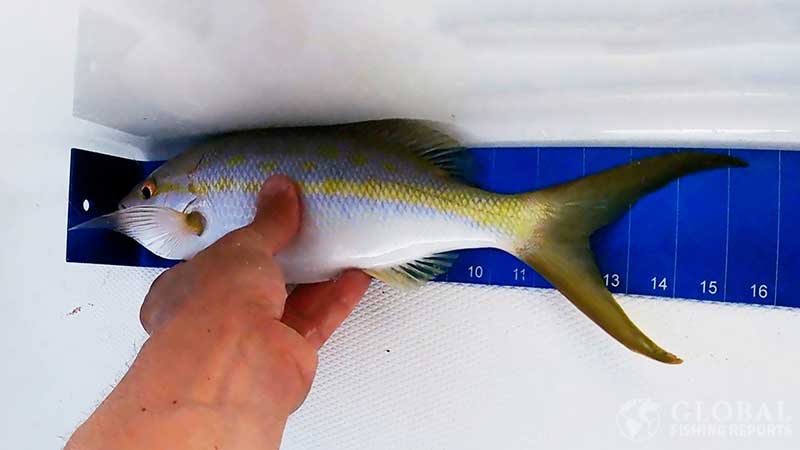 Measuring a yellowtail snapper is easy with a fish ruler. These are sometimes called golden rulers and have the front bent to allow the mouth of the fish to press against it.  This fish has a fork length of 12.25 inches and a total length of 15.5 inches. The 12-inch length for yellowtail snapper is a 12-inch total length and the tail can be pinched together during the measurement. 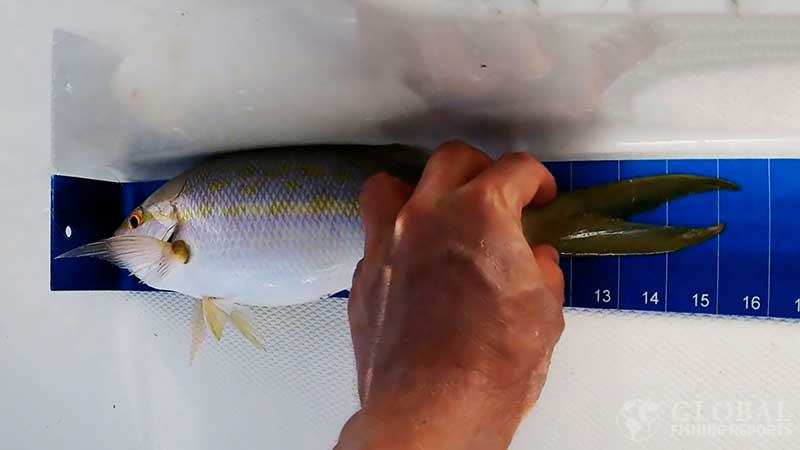 In this photo, I show the proper way to measure a yellowtail snapper. Place the front lip of the fish against the ruler and then pinch or squeeze the tail. The length of this snapper is 15.5 inches. It is common to catch yellowtail snapper from 8-22 inches. If you are going to keep the snapper it is a good idea to bleed the fish by cutting a gill and then quickly placing it in a cooler full of ice. 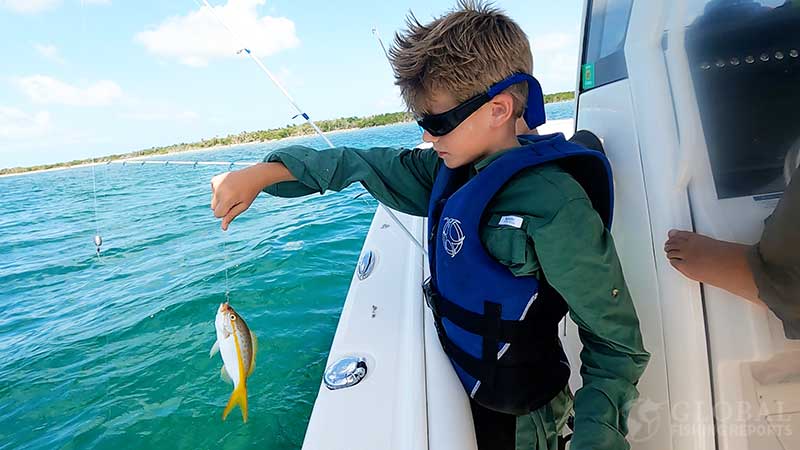 These fish are leader shy though and if you can see them and they are not biting going to a thinner line is a good idea. A 20-pound line is on the heavy side, a 10-pound monofilament line or fluorocarbon line is perfect. If a braided line is used make sure a fluorocarbon leader of at least 6 feet is added to the line.

When fishing the reef it is very likely that much larger fish will bite but these should be caught on heavier gear. On the surface, it is good to have a large live bait out for mackerel, wahoo, and barracuda. On the bottom, bigger rigs can be set up for sharks, grouper, and mutton snapper. In the middle water column, there can be spadefish, amberjacks, almaco jacks, jack crevalle, yellow jacks, and permit. Which such a large range of fish that can be caught it is good to be prepared with good bait and strong tackle. If all the tackle is too heavy though lots of cool fish that could be caught will be leader shy and not bite.

Other target species to catch when fishing with the light yellowtail snapper setup are rainbow runners, blue runners, hard nose jacks, spadefish, bonito, and other types of snapper. 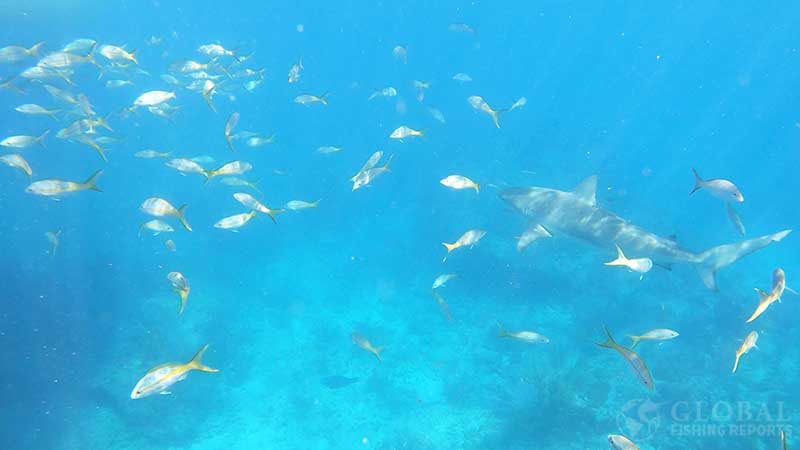 The picture above shows a shark swimming with a school of around 100 yellowtail snapper. It is actually common to fish for these fish around goliath groupers, sharks, barracuda, and king mackerel. This means that when you are fishing for yellowtail snapper there are lots of other larger fish to catch as well.

The video above shows a large shark swimming with tons of yellowtail snapper.  The shark also has some blue runners and a remora swimming with it. It is common to catch blue runners, remora, barracuda, mackerel, and sharks when fishing the reef.