Fluorocarbon line has a larger diameter than braided lines and about the same diameter as monofilament lines. Even though the line has around the same diameter it still has several advantages and disadvantages compared to a nylon monofilament line. The main advantage anglers think of with fluorocarbon is that it is more transparent underwater. This is typically the case because the index of refraction of fluorocarbon material is closer to the index of refraction of water. Thinner lines still reflect and bend less light and are more transparent. Also, the color or tint of the line can also make it less visible depending on water color and lighting conditions. 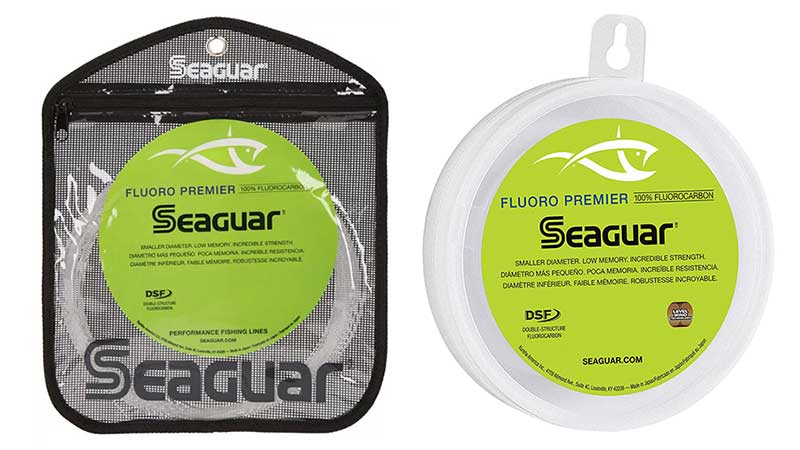 Fluorocarbon lines are only made with Fluorine and Carbon atoms. This makes the line have a higher density than monofilament. For this reason, fluorocarbon will sink faster in water, not absorb water, and not break down as quickly from UV damage. The line also tends to be more abrasion resistant but is about the same as a nylon line if the diameter is exactly equal.

The disadvantage of fluorocarbon is that it is stiff and does not have a high line stretch. Stiff lines are not good as a mainline and not as good when fishing with live bait. Monofilament leaders have high line stretch which makes them better for shock leaders. There are lots of different brands of fluorocarbon leaders and picking one with the smallest diameter should be taken into consideration when selecting a line. This is because it will likely be the least visible underwater.

Ande Fluorocarbon is my favorite type of leader to use for freshwater and saltwater fishing if the line is 50 pounds or under. It typically comes in red spools with clear lines. This is great leader material but the line diameter is much larger than other brands when looking at lines over 50 pounds. For example, 80-pound Ande is 1.00 mm while 80-pound Seaguar Premier is 0.78 mm.

I can still tie knots with an 80-pound Ande line but the line is noticeably thick. For leaders over 80 pounds, I will crimp the line rather than tie a knot. If you look at Seaguar Premier though the 130-pound line is only 1.05 mm which is comparable to Ande 80 pound test which is 1.00 mm. The line is made in Japan and comes in 25, 50, or 100-yard spools.

Seaguar Blue Label is a widely used fluorocarbon leader. Its line diameter is smaller than most other fluorocarbon lines. The Seaguar Premier does have thinner line diameters. For this reason that is typically the better line to use as it will be less visible to the fish. If abrasion resistance is important the blue label with a larger diameter is likely more abrasion-resistant.

This thinner diameter also makes it easier to tie knots. Leader lines can be attached to a braided line with a line-to-line connection. When fishing mono or a fluoro leader on a lure it is typically attached with a crane or barrel swivel. A common leader length for trolling lures is 6 feet but varies depending on the type of fish being targeted. Anglers targeting mutton snapper typically use leaders over 30 feet long and up to 80 feet. This is because they are very leader-shy fish that live in clear water and will not typically bite if the bait is not presented in a natural way.

Yo-Zuri HD is one of the thickest leader lines at the 20-pound test value but comparable to other high-end leader thicknesses at 80 pounds and above. It is marketed as a soft line that is made in Japan. It comes in clear and pink. I use a clear leader and do not think that pink leaders are less visible. This is because the pink color disappears under 20 feet but it actually turns to a tint of gray. In general, a clear or light color line is less visible underwater. I stay away from dark-colored fishing lines for braid, mono, and fluoro leaders. Pink is not super dark but still likely not helpful and the color is a line impurity that can decrease the line strength.

Hi-Seas leader line diameter is average when comparing it to the diameter of other lines. It is made with 100 percent fluorocarbon as are most other leaders. For this reason, it will have a similar performance to others made with the same material. How a line is manufactured does change the properties slightly but mostly is just marketing tactics to say one is better than the other. However, the line diameter is one way to objectively compare leaders at a given pound test.  Hi-Seas is an American company but the line is made in Portugal.

Berkley Pro-Spec has the largest 20-pound leader diameter. This is not typically a good thing. At a high pound test rating the line diameter does become competitive with others but is still on the thick side. It is marketed for having high durability and crimp strength which is likely true. The line is made in the USA. For low line visibility, the Berkely vanish is a better option and is also made in the USA.

If you just want a tough abrasion-resistant line for fish that are not leader shy then Berkley Pro-Spec is a good option. Fish that require a line with high abrasion resistance include tarpon, snook, sailfish, swordfish, marlin, and even large bass. These fish have mouths that are rough like sandpaper. Fish that have sharp teeth like sharks, barracuda, wahoo, mackerel, pickerel, pike, and musky require a steel leader.

Berkely Vanish comes as a fluorocarbon fishing line and as a leader line. The bulk spools of the fishing line actually work well as a leader material as well. The mainline material is not stiff and is soft like a monofilament line. This is the type of line I like to use for trout fishing in streams and snapper fishing on the ocean.

Seaguar Red Label is a fluorocarbon mainline. It is soft and flexible enough to work for spinning reels and baitcasting reels. The 20-pound red label line is not as thin as Seaguar Premier but this line come in a lower-pound test value all the way to a 4-pound test. Thinner lines are going to be less visible so using a lower pound test will typically get more leader shy fish to bite. This line has less stretch than monofilament but more stretch than braid. It only comes in line strength up to 20 pounds because heavier lines would not be soft and flexible enough to work great as a mainline.

P-line is 100 percent fluorocarbon and is made in Japan. Overall this line has an average diameter compared to other lines. It only comes in line rated from 6-20 pound test.

If the line rubs on the mouth of a fish or on the ground it tends to get rough and is actually very visible to fish. For this reason, the end of the leader should be monitored to make sure the line looks clear. Sometimes dirt and slime in the water can also build up on the line. If this happens wipe the line down with a cloth to help the line stay clean.

The video above looks at the fishing line’s visibility underwater. A fluorocarbon line is not invisible underwater but the thinner it is the less visible the line should be. There are other factors but the fishing line diameter plays the greatest role in differences in line visibility when the line is the same material and color.