Grunts are a common fish to find on the reef in Florida. These fish live in the grass flats, mangroves, coral reefs, on deep wrecks, and pretty much near any type of structure. They are often in large schools. For this reason, if you catch one it is likely you are about to catch more. 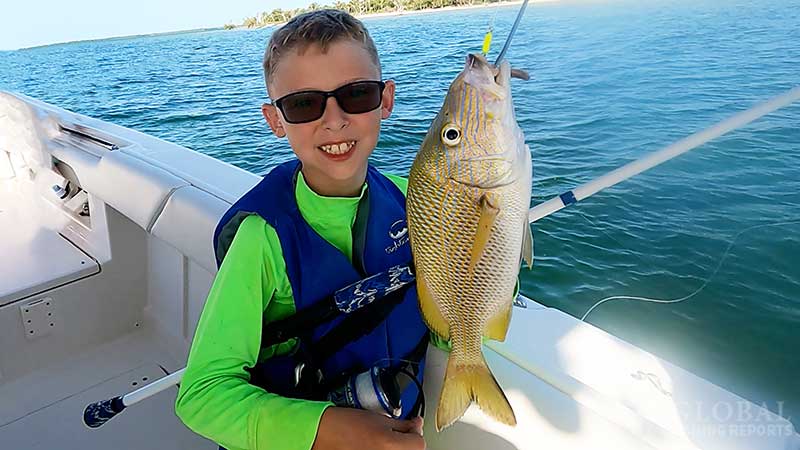 Grunts do not have a size limit in Florida and 100 pounds of fish can be kept per angler per day. On party boats and bottom fishing trips, it is common to catch and keep white grunts to eat. The meat is similar to mangrove snapper. If anglers have caught lots of other fish grunts will likely be released. However, if grunts are all that is being caught it is a good to fish to eat when it is fresh. 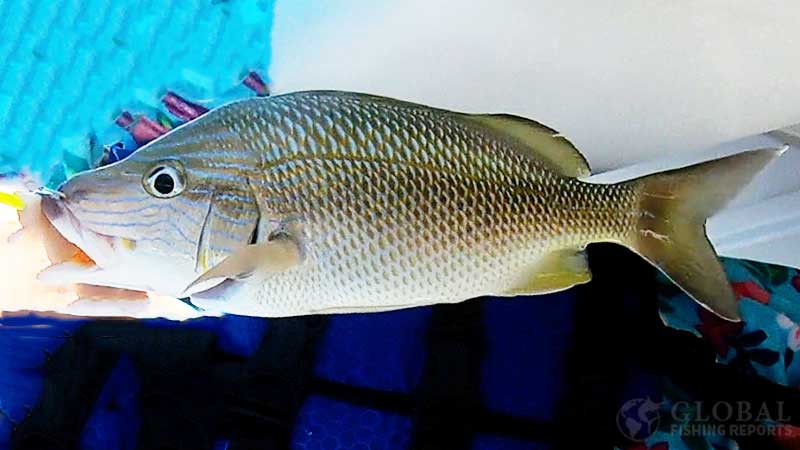 White grunts can be pretty large with the IGFA world record being 6 pounds 8 ounces. White grunts will have blue stripes on their head but the body is mostly brown, gray, and white. The mouth of a grunt also has a unique shape. Another giveaway that you caught a grunt is that it will make a grunting noise. This is how it got its name similar to a croaker making a croaking noise. 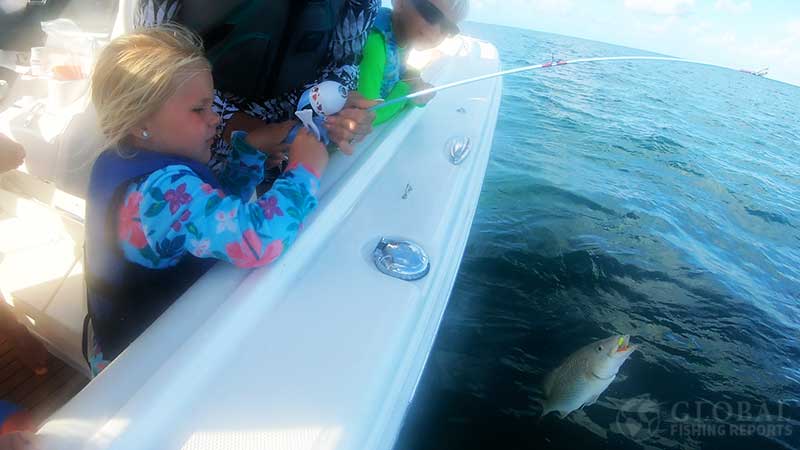 White grunts are fun for kids to catch as they are pretty easy to catch. In the picture, my niece is reeling in a large white grunt on a small frozen-themed spincast rod and reel. This fish was caught using a 1/16 ounce jig with a small piece of squid for bait. Good baits for grunts include squid, shrimp, ballyhoo, or silversides. 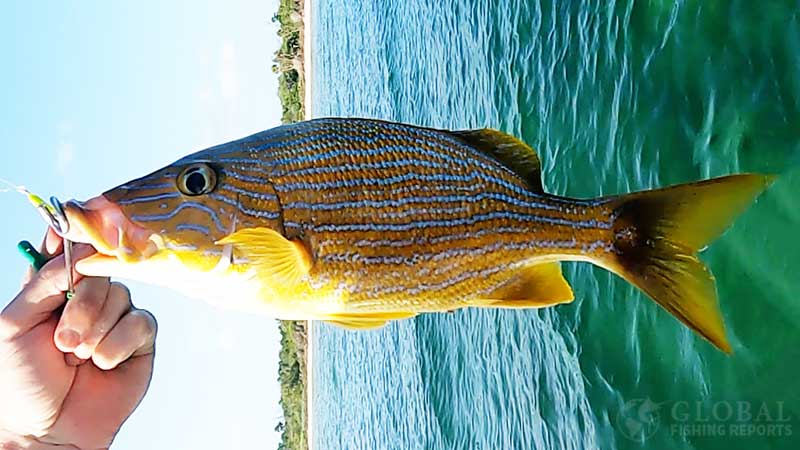 Bluestriped grunts do not get as large as white grunts. The IGFA world record for a bluestriped grunt is 1 pound 8 ounces. These fish have blue, white, and yellow horizontal stripes. The body and fins of the fish are mostly yellow. This is a colorful pretty fish to catch or see when snorkeling. 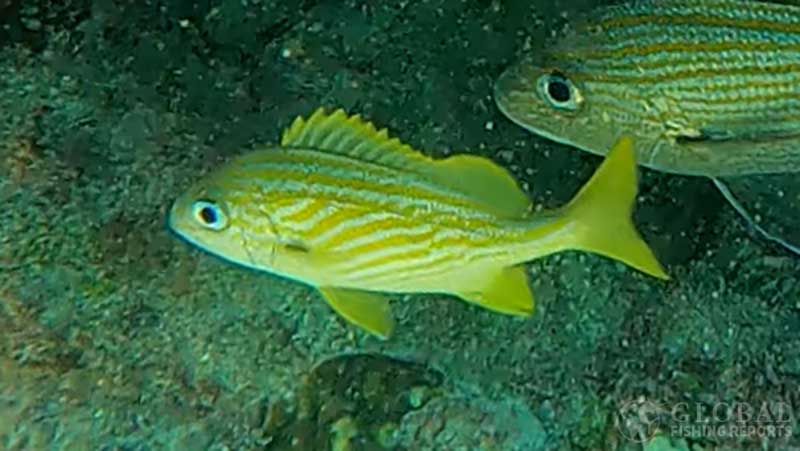 The French grunt is also called a yellow grunt. In the photo is a small yellow grunt that is on a coral reef in Florida. This grunt has yellow and white horizontal and diagonal stripes. The tail and fins are mostly yellow. This type of grunt is typically too small to keep and eat. 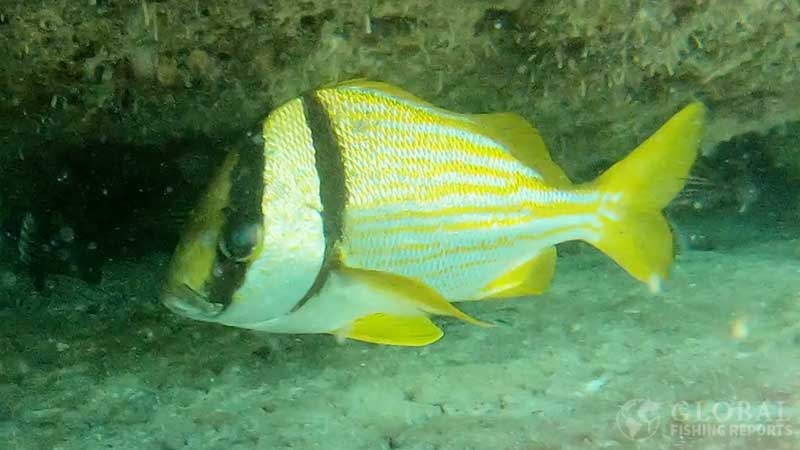 I took the picture above of this porkfish under a ledge in the Gulf of Mexico. There was also a lobster and grouper under the same ledge. Porkfish are a very unique fish to see on the reef. This is due to its large unique head shape and two large black vertical stripes. The tail and fins are solid yellow. It has a very large black eye. This fish does not have a lot of meat due to its small size and body shape. For this reason, it is typically released when caught fishing. It will bite typical snapper baits such as squid, shrimp, and small pieces of fish. 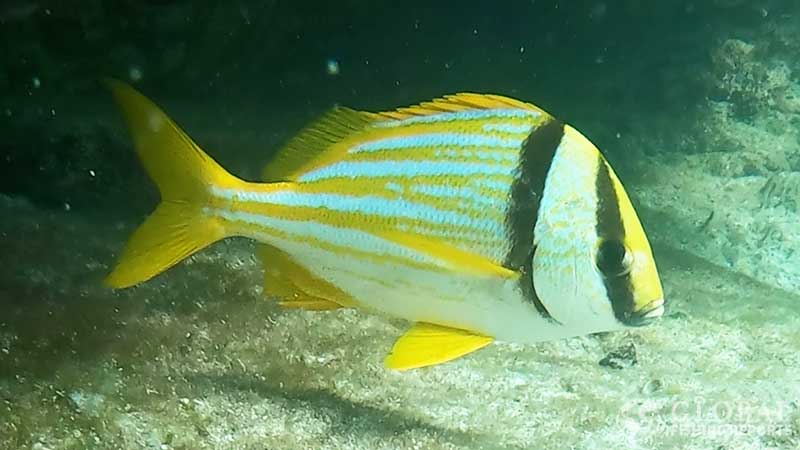 The photo above is of a porkfish grunt. Notice the top dorsal fin has sharp pointy ends similar to snapper, and bluegill. If you catch a porkfish caution should be taken to not get poked with the fins. They are not poisonous or venomous but will still hurt to get poked with.

In the video above I am snorkeling in the Florida keys. I dive to look under a ledge and there are two porkfish grunts, snapper, and grouper under a ledge in about 10 feet of water. 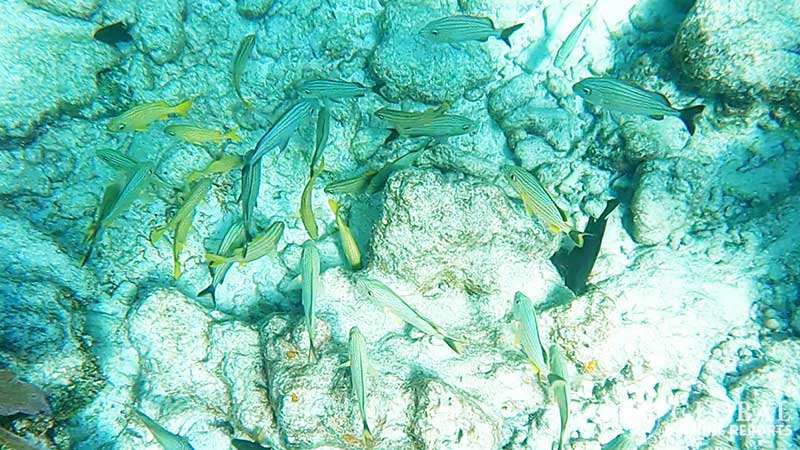 In the photo above there is a school of grunts around some pieces of coral on the reef. It is very common to see schools of bluestriped and french grunts on the reef. Sometimes they are in formations or schools and other times they are just scattered about. These fish are prey for larger fish such as sharks, barracuda, and grouper. They will eat small minnows, shrimp, squid, and crabs.