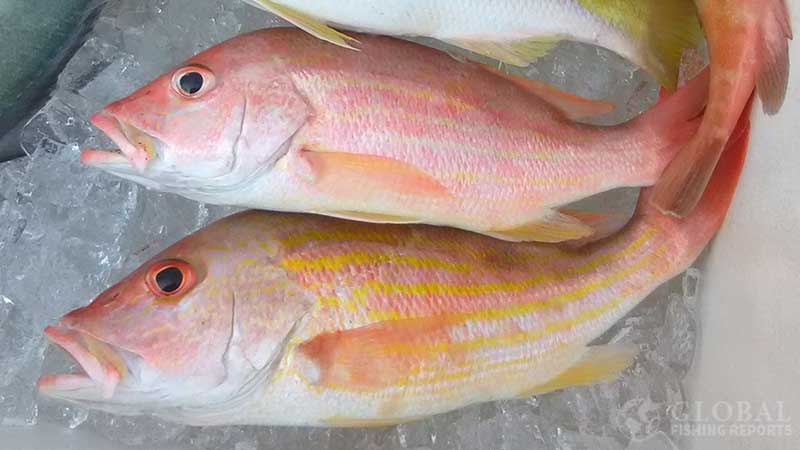 The photo above shows two lane snappers on ice in a fishing cooler. Lane snappers have a large black dot on its upper back between the dorsal fin and its tail. However, once the fish is on ice the dot becomes much less visible. It is important to properly identify the type of snapper before keeping it. This is because different types of snapper have different size limits and bag limits. Florida Fish and Wildlife have fishing regulations for each type of snapper. It is important to notice there are different regulations for the Gulf of Mexico and the Atlantic Ocean. 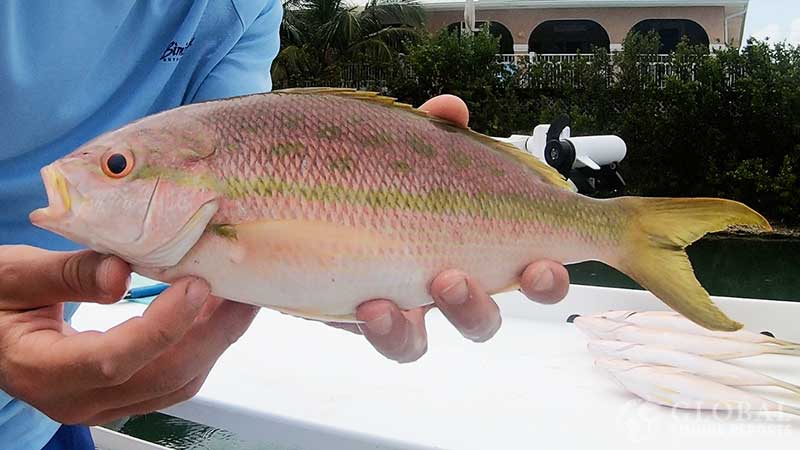 Yellowtail snappers are an easy fish to identify because of the bright yellow tail which is also called the caudal fin. The eye, dorsal fins, adipose fin, pectoral fins, and pelvic fins are also yellow. There is also a long horizontal yellow line that runs the length of the fish. Juvenal and adult yellowtail snapper look very similar.

The teeth are sharp and pointy so do not try to lip a snapper like largemouth bass. Fishing for yellowtail snapper is pretty easy as they are attracted to chum. In Florida, this type of snapper needs to be 12 inches long to keep and 10 fish can be kept per day per angler. This does count toward the 10 total snapper aggregate daily limit. 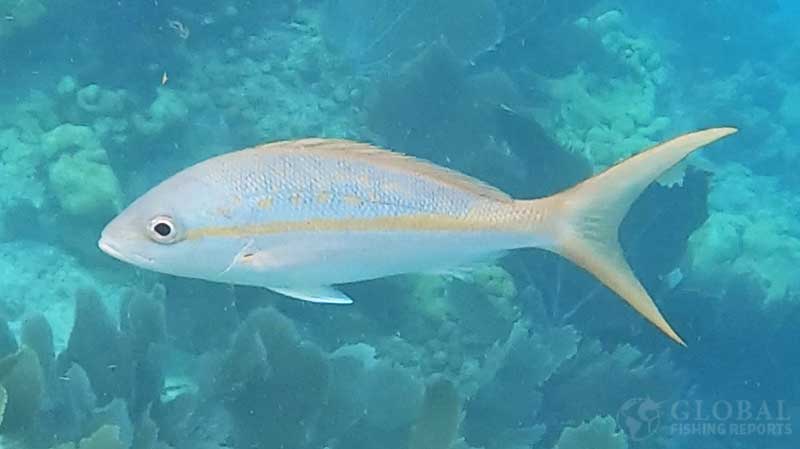 In the photo above is a yellowtail snapper that is about 12 inches in length swimming in the water. This is on a coral reef in the Florida keys. Notice the snapper is mostly yellow and white. 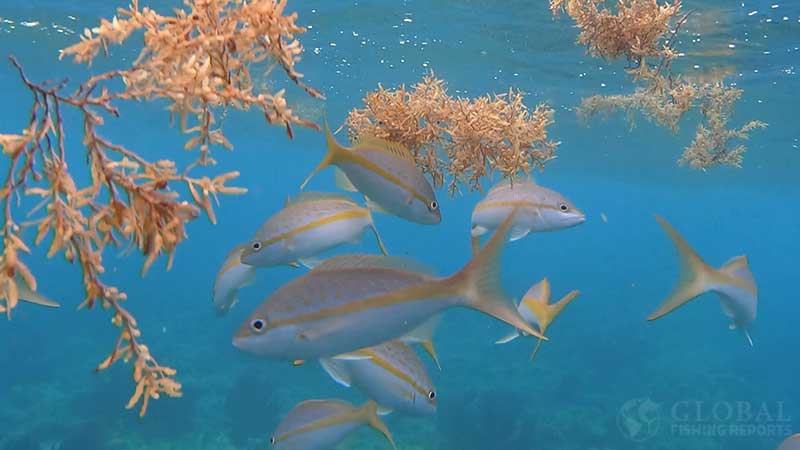 Yellowtail snappers are almost always in schools. This means that if you catch one you can usually catch more. Also if you catch a small fish most of the other fish will likely be small. For this reason, it is common to try multiple spots when yellowtail snapper fishing to try and locate a school with large keeper-size fish. This type of snapper lives near the bottom structure but will come up in the water column when feeding. For this reason, most yellowtail snapper spots are on structure but the bait is set at a mid-depth.

In the video above my dad and I show you how to catch yellowtail snappers. This is done using ballyhoo and fish hearts for bait. 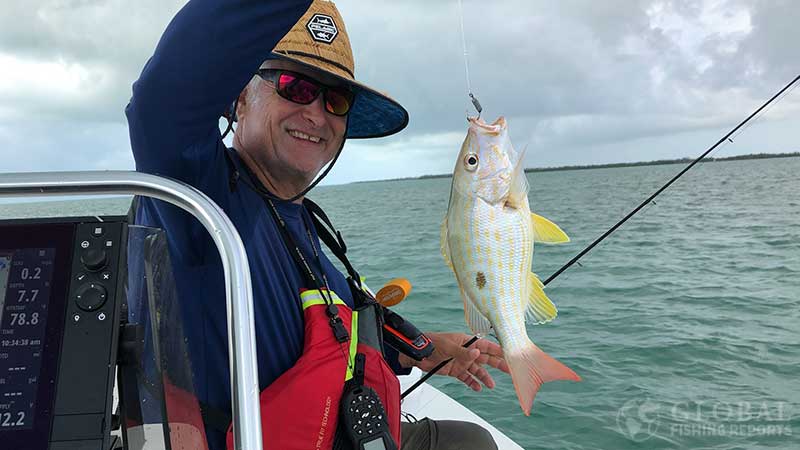 In the photo above my dad caught a lane snapper in the Gulf of Mexico off the Florida keys. He is on a flats boat in shallow water.

Lane snappers are a smaller type of snapper. The IGFA world record for lane snapper is 8 pounds 3 ounces. In Florida lane snappers only need to have a total length of 8-inches which is a shorter length than most other snappers. Just make sure it is a lane snapper and not a small mutton snapper which must be 18 inches long to keep. 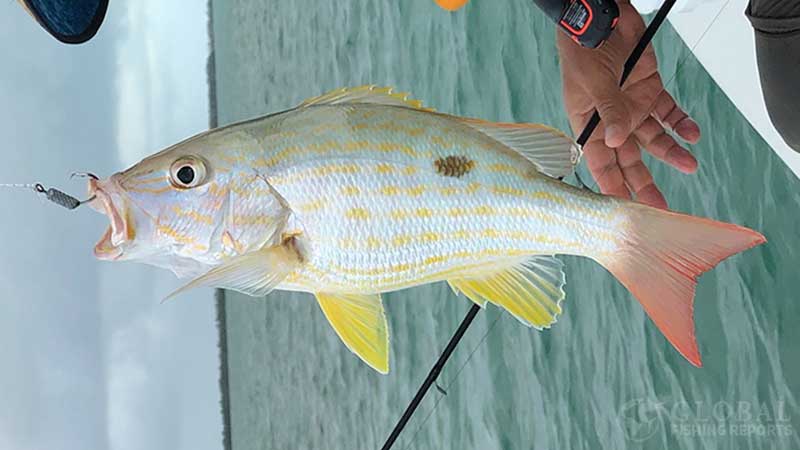 This is a close-up view of a lane snapper that was just caught on a small jig. Notice the unique colors. It has mostly yellow fins with a red tail. The fish is mostly white with yellow horizontal stripes. Also, it has a large black dot on the upper back behind the dorsal fin. 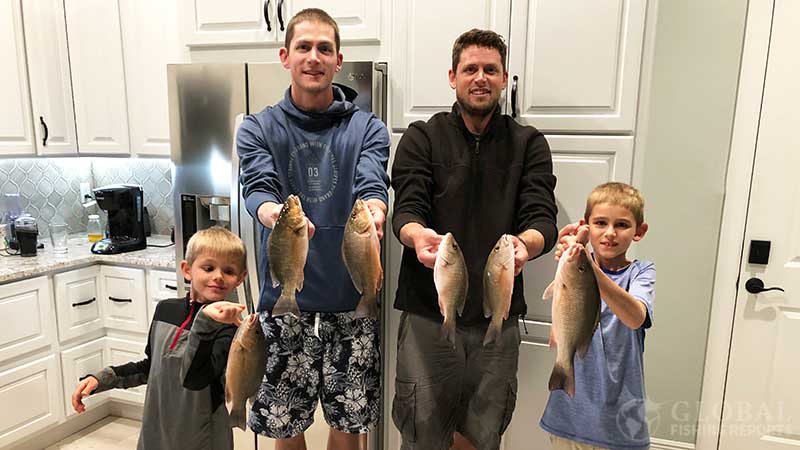 Mangrove snappers are the most common snapper in Florida. These fish are everywhere from in the mangrove in 6-inches of water to under deep ledges on the reef. In the photo are some mangrove snappers my brother, nephews, and I caught in the Florida keys fishing at night in kayaks. 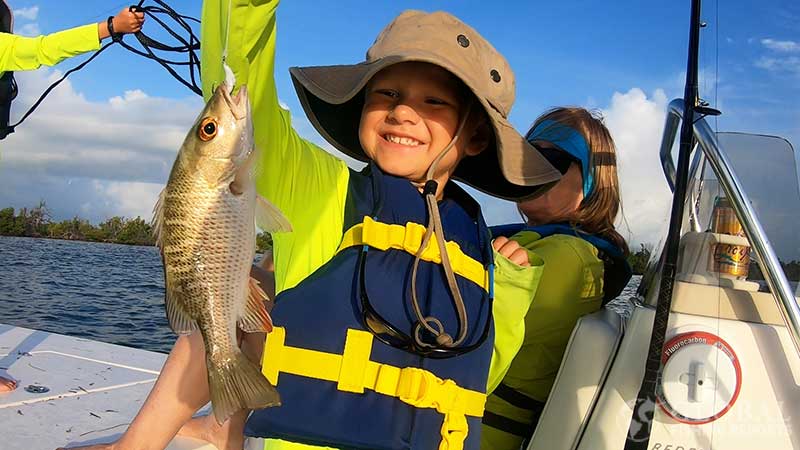 Fishing for mangroves is super fun for kids cause they are plentiful and easy to catch. In the photo, my nephew Jesse caught a small gray snapper using a white jig with a small piece of bait.

Mangrove snappers are gray, brown, and light green in color. They also have a dark brown diagonal stripe on the front of the head near the eye. The stripes on gray snapper run vertically. The dorsal fin, adipose fin, and caudal fin are all gray or light brown. While the pectoral fins, pelvic fins, and fins have a shade of red. 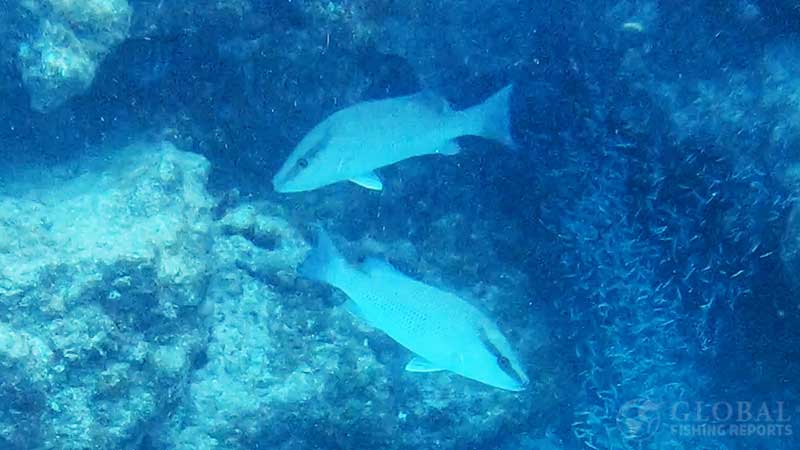 In the water, mangrove snappers look light gray and have a pronounced horizontal stripe on their head running through their eye. In this picture, there are two large mangrove snappers feeding on some small minnows on the reef.

Mangrove snappers spawn late in the summer and there can be tens of thousands of snappers in one place on the reef. The spawning season is from early July through September. This makes for easy fishing if you find a location where mangrove snappers are spawning. This can be at depths from 20-80 feet. Many anglers will target them during this time of year during the day and at night.

In the video above Captain Aaron Young from Key West Waterman free dives with a large school of mangroves snapper. This gives you an idea of how many of these snappers can be found on the reef during the spawning season. 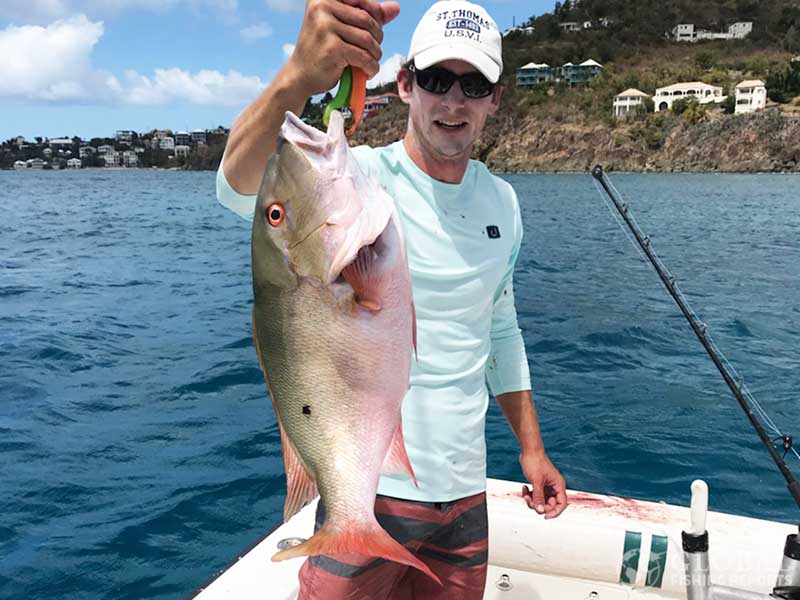 Mutton snappers are one of the larger species of snapper. The IGFA world record is 30 pounds 4 ounces and was caught in the Dry Tortugas which is around 70 miles west of key west. These fish must be 18 inches long in order to keep them in Florida. Five mutton snappers can be kept per angler and this does count toward the 10 total snappers limit per angler per day. The snapper I am holding in the picture was caught in St. John in the USVI.

Mutton snappers are known to be leader shy and noisy tackle shy so typically a 20-plus foot 20-pound fluorocarbon leader is used. These fish can be found under ledges or in the flats around shipwrecks or large structures. Muttons snapper fishing is typically done by drifting with live bait rather than anchoring with chum. 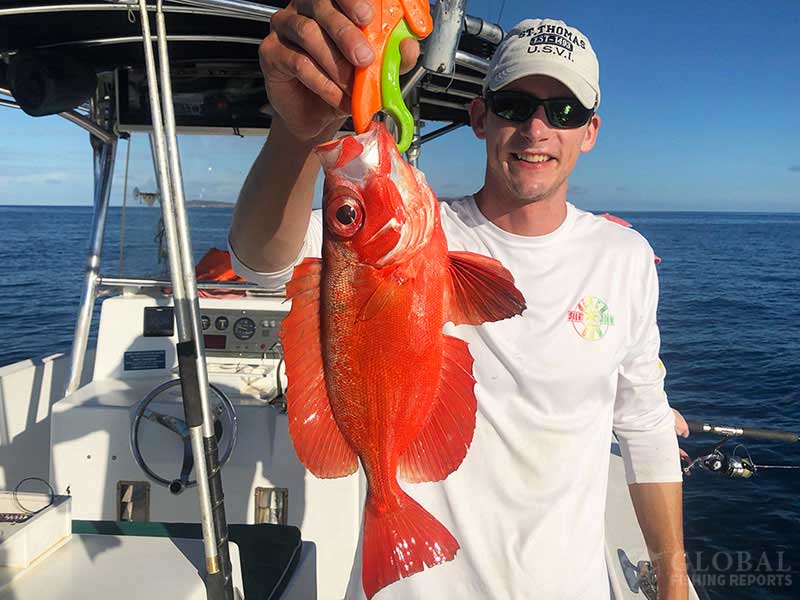 The glasseye snapper is also called the toro snapper, or bigeye snapper. Technically it is not in the snapper family but is called a snapper. It is not in the Florida fishing regulations but I am pretty sure you can keep them it just counts toward your snapper limit. I am not positive about that though. People do keep them to eat and say they smell bad but taste alright.

It is not a common fish to catch but can be found on the reef or near the bottom of deep water. The glasseye snapper I  am holding in the photo was caught in St. John in the United States Virgin Islands. They can also be caught in Florida and up the Atlantic coast. It has a large glass-like eye which is where it gets its name. It is pretty much all red in color including the fins and body. 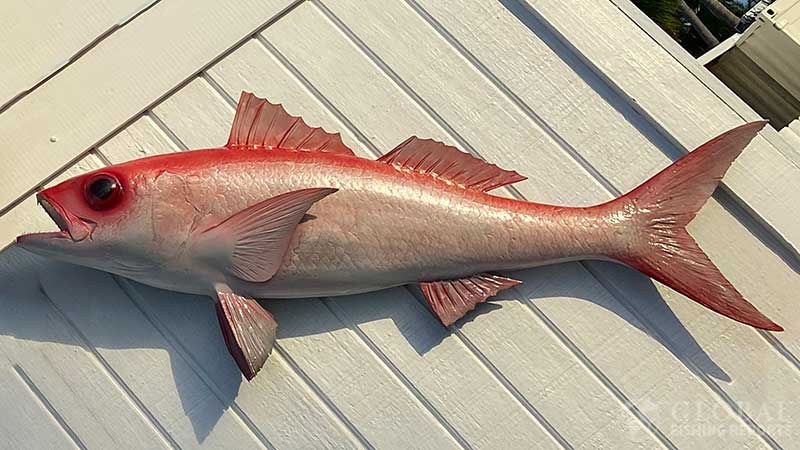 Queen snappers are found in deep water. In the Florida keys, these are targeted near ledges in 700 to 1,000 feet of water. This fishing method is called deep dropping and is also used to catch snowy grouper, barrelfish, and tilefish. In Florida, each angler can catch 10 of these fish per day and there is no size limit. The 10 fish does count toward the 10 total snappers that can be kept per angler.

Queen snapper can be quite large and the IGFA world record is 28 pounds. Fish this large are probably caught frequently but do not count as a record if an electric fishing reel is used. Common baits are bonito strips, chunks of barracuda, and squid.

Red snappers are a sought-after type of snappers for their size and taste. Their season only lasts about 2 months from mid-June to the end of July. The IGFA world record is 50 pounds 4 ounces. In order to keep a red snapper in the Gulf of Mexico, it needs to be 16 inches, in Atlantic waters it needs to be 20 inches long. This snapper has the same shape as mangrove, mutton, and lane snapper. The difference is this snapper is red. It is common to travel 20 miles out or further in the Gulf of Mexico to catch red snapper in water deeper than 80 feet. It is important to have a fish descender to send fish that will be released back to depth safely.

Cubera snappers are the largest of the snapper species. The IGFA world record for Atlantic Cubera is 124 pounds 12 ounces. For Pacific Cubera the record is 78 pounds 12 ounces. In Florida, in the Gulf of Mexico, and in the Atlantic ocean the snapper needs to be 12 inches in length to keep and the angler or boat can only have a maximum of two Cubera over 30 inches onboard. 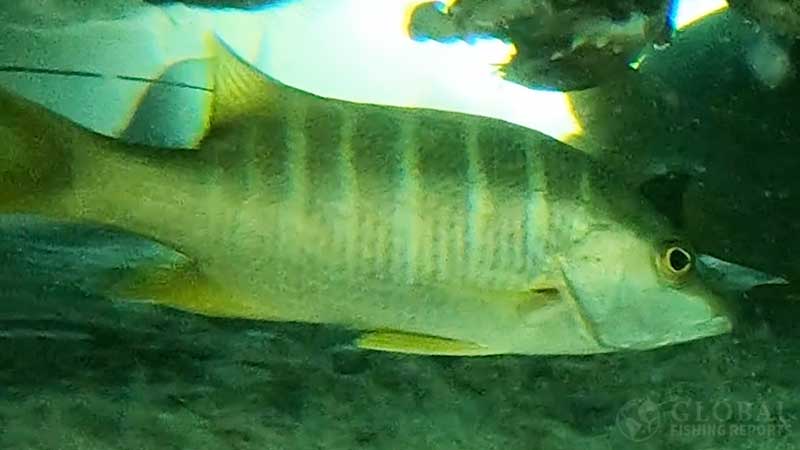 Schoolmaster snappers are light brown, gray, and have yellow fins. The vertical stripes are white. To keep this type of snapper in Florida it needs to be 10 inches in length. It can be caught in the Atlantic Ocean and in the Gulf of Mexico.