American crocodiles came off the endangered species list in 2007 but they are still very much protected. Their numbers are growing in Florida and sightings are becoming more and more common in the Florida Keys. Many people are unaware that crocodiles live in Florida. There has only been one attack by a crocodile in Florida. In this incident, a man and woman were both bitten while swimming in a canal in a residential neighborhood south of Miami. The attack was not fatal. In most cases, people and crocodiles keep their distance. Below we will look at times where crocodiles were filmed in the Florida Keys.

Islamorada is about 72 miles east of key west and about 80 miles from Miami. This places the key just south of the everglades. Islamorada is known as the fishing capital of the world and also has some crocodiles. Sighting of crocodiles in this key is not very common. However, in certain areas where they nest, they are commonly seen each year in Islamorada. Crocodiles are more common just a bit further north in the everglades.

The number one killer of crocodiles is getting killed in vehicle traffic. For this reason, it is important to drive at a reasonable speed and keep your eyes out for crocodiles that might be crossing the road. In the video below a crocodile is swimming in the mangroves while people are kayaking in the area. The crocodile does not seem to be bothered much by the people being in the area.

Marathon is in the Florida Keys and is about 30 miles southwest of Islamorada. Crocodile sightings are less common in Marathon than in the upper keys and everglades. In the video below a crocodile is spotted resting on a power cord and hose at the Boot Key Harbor in Marathon. It looks like the crocodile is interested in fish near an underwater light. The crocodile is about 8 feet in length.

There are even crocodiles are far south as Key West Florida. Further actually, even all the way to the Dry Tortugas which is about 70 miles west of Key West. This shows that crocodiles can travel across the open ocean. The video below shows great footage of a crocodile filmed by a snorkeler. There are lots of minnow and baitfish swimming around and the water is crystal clear.

The video below shows the crocodile being captured for relocation. It gets a private seaplane ride to its new home!

The diet of the American crocodile consists of fish such as tarpon, bass, mullet, silversides, pilchards, snapper, and stingrays. These crocodiles also eat mammals and birds such as opossums, rabbits, raccoons, goats, hogs, cows, herons, pelicans, and similar species. Other things they eat include frogs, crabs, insects, and turtles.

I took the video below while kayaking in the Florida Keys. It was around 10:00 at night at my nephew and I were out looking for spiny lobster. We also see lots of other cool things like blacktip sharks, nurse sharks, stingrays, tarpon, barracuda, and ballyhoo jumping out of the water.

We see a very large stingray go by which we thought was cool. Then as it goes into water that is about two feet deep their is a loud splashing noise and the stingray starts getting spun around in circles. As time goes on the stingray gets spun faster in what appears to be a crocodile roll. A tail is seen coming out of the water but it is hard to see the crocodile as it is nighttime.

Do not Feed Crocodiles 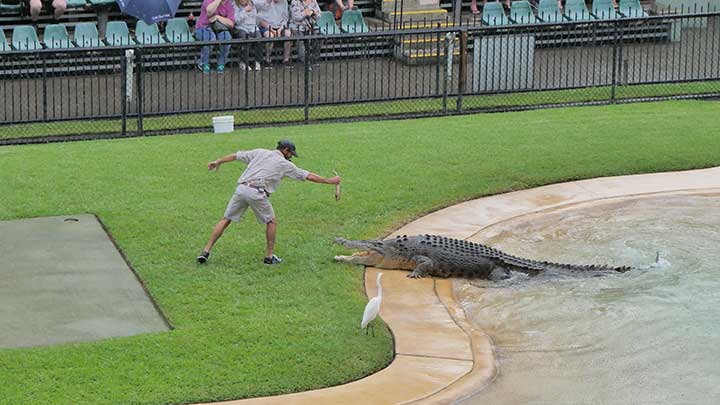 It is important not to feed crocodiles if you see them. After catching fish is it common to throw fish scraps into the water. In areas where fish are caught daily sharks, tarpon, snappers, and jacks tend to live there waiting to be feed. This would not be a good thing for crocodiles.

If they get used to associating humans with food the crocodiles will likely be seen as a problem for many people. It is better for crocodiles to be scared of humans and not learn to approach them. This helps protect small children, swimmers, and pets that spend time in shallow water and along the edge of the water. There are stiff fines in Florida for feeding wild crocodiles or alligators.

Crocodiles and Alligators in Florida